Home
Bark Talent
Adorable Young Rottweiler Shows He Doesn’t Need To Do Anything For Us To Fall In Love With Him, And This Clip Is Proof Of It

Puppies have always wielded an unexplained power over us, and they have been doing so for quite some time now. The Rottweiler in this story may be young, but he proved he possesses the power we’re talking about.

This Rottie couldn’t be more than two months old, but his adorable meter is already off the charts. The dog’s owner understands it way too well.

All the puppy had to do was wobble around, and anyone who sees him is guaranteed to be smitten.

The dog decided to make himself more comfortable, so he bobbed his way to the left and to the right. He couldn’t seem to make sense of what was going on, so he decided to just be and lowered himself to the floor.

Since he was already lying down, the dog decided to enjoy his newfound freedom. He continued jiggling around, but this time it looked like he was analyzing or surveying his surroundings.

After seeing all this, you can’t help but think of two things. First, owning a dog comes with some serious responsibilities.

This puppy will need all the attention and care his owner could give to grow to his maximum potential.

Second, that’s the price pet owners pay for beholding such adorable goofballs every single day. Having access to canine cuteness comes with a price, but it’s something we all are willing to pay.

This puppy concluded that he wasn’t going anywhere, he decided to go with the simplest way of relaxing.

Instead of constantly trying to figure out what was happening around him, he just stayed put and observed.

The dog’s humans couldn’t believe the kind of command this Rottie held, but we bet this puppy’s owners couldn’t be prouder of their tiny fluff ball. Stay adorable, little Rottie! 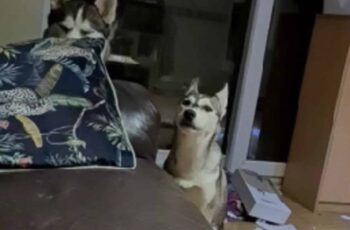 Most of the time, we find dogs as easy-going animals. … 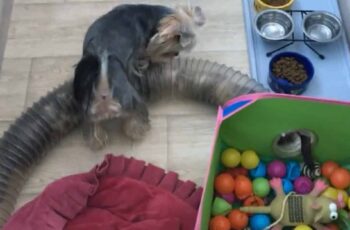 Everyone knows how playful our canine buddies are. The moment …