Home
Bark Talent
English Mastiff Takes A Ride In A Golf Cart, And Then Crashes It Into His Owner’s Vehicle

Dogs engage in several funny yet naughty behaviors. And this English Mastiff in this story shows how funny and mischievous canines can be.

A security camera captured Titan, an English Mastiff, having a stroll outside his Manitoba home. Then he saw a golf cart and decided to get inside it.

Titan was strolling across his family’s expansive yard when he decided to relax in the golf cart. When he jumped onto the mini-vehicle, however, he inadvertently stepped on the throttle pedal, causing the vehicle to move and circle the yard.

The golf cart was stopped in its tracks by a massive black Chevrolet pickup truck sitting outside, and crashing into the pickup truck caused it damage. Titan leaped swiftly off the golf cart and appeared to be assessing the damage he had just done.

Titan’s human and owner of the black Chevrolet, Mallory Kmet, stated that she was away with her husband when the incident occurred. When she returned, she told her husband that someone had been in their yard, taken the golf cart for a joyride, and struck their car.

So what actually happened on that fateful day?

Titan was apparently seeking cover in the yard because his family had temporarily forbidden him off the deck after he was sprayed by a skunk. It appeared that Titan was having a bad day.

Mallory reported that Titan was still eager to ride the golf cart with her despite the mishap. She also noted that after the event, she began ensuring that the family’s golf cart, which was used to move firewood, was properly shut off before leaving it.

The video of Titan was picked up by numerous media outlets, most notably the Canadian morning television program Your Morning. Titan’s video on Your Morning’s YouTube page currently has more than 130K views. 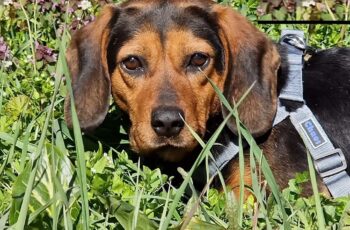 In a small village in Karditsa, Greece, a kind man …

Peggy, a Pittie, felt incredibly confused when her mom, Juliette, …