Ever since smart doorbells have started rising in popularity, they have managed to witness some really unbelievable moments. One of those said moments was captured when a dog ran away from home.

According to a Reddit post by user boopbeepboopbop999, who is also a dog owner, Rajah the dog had run off after getting scared by their neighbor’s fireworks. Many hours passed without any sign of Rajah, and her owner naturally got worried.

Rajah was adopted from the pound, and she was at first very shy and kept to herself. However, after getting comfortable and letting her personality show, she kind of began ruling the house, though some things, including fireworks, still bothered her.

It was around 7:00 PM to 8:00 PM when Rajah ran away, which didn’t give her owners much sunlight to effectively search for her. They eventually had to stop searching and turn-in for the night hoping that Rajah would turn up.

The next morning at 3 AM, their doorbell rang. After getting up and walking to the door, they discovered that it was Rajah who was at the door. She had gotten home by herself and rang the doorbell to let her owners know that she was outside waiting.

The doorbell showed Rajah hopping up and pressing the ringer using her nose, which was such a clever move by her.

Her owner posted the footage on Reddit with a caption that said that their dog who had run off on an adventure returned after 7.5 hours and was ringing the doorbell to let them know that she was home.

People were impressed by Rajah using the doorbell, and one of them asked the owner in the comments of her post if she trained Rajah to use the doorbell. Rajah apparently wasn’t trained and that her owner didn’t even know she was aware of the doorbell.

Rajah’s owner also shared that after Rajah came home, she slowly walked in thinking that she was in big trouble but in reality, her owner was just relieved that she returned safe and sound. Rajah also immediately slept after coming home.

Our dog who ran off on an adventure for 7.5 hours ringing our doorbell at 3 am to let us know she’s home from AnimalsBeingDerps 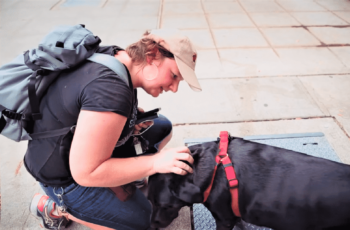 A dog from Seattle earned her celebrity status and became …

A woman and her dog were hiking up the Angeles …